Back-propagation
Back propagation is the process by which you move backwards through the neural network to adjust the weights and biases so as to reduce the total error of the network. The total error of the network is essentially the difference between the end results (actual Outputs) and the expected results. If you expected to get a result of 1, but instead got a 0:  you would go back through the network and tweak each of the weights (and bias) values so that your end result was a little bit closer to 1 than before.
The process of back-propagation is such that larger errors and larger weights and biases that create those errors are penalised more than their smaller counterparts. Bigger weights have a bigger influence on the final outcome than smaller weights, and are therefore penalised more for incorrect answers.
After many training cycles, the neural network reaches a stage of equilibrium (not quite, but close enough), whereby the tweaking is insignificant to the final outcome.
If you under-train, then you will get the wrong result more often than desired.
If you over-train, then the neural network will not be able to "think outside the sqaure", so to speak.
So how do you propagate backwards ??
Step 1:  Feed-forward pass through:
Send some data through the network to populate all the variables. This feed-forward pass allows you calculate your actualOUTPUTs, which you will use to compare against your expectedOUTPUTs.
Step 2: Calculate delta-error for the neurons in the last layer (output layer).
The delta-error calculation for the neuron(s) in the last layer of the neural network is a liitle bit different than the other layers. You can work this out once you calculate the actualOUTPUTs from the feedforward pass.
Let  Last Layer Neuron1.deltaError = LLN1.dE
Last Layer.actualOutput1 = aO1            <--- This is the same as the Neuron1 Output Value
Last Layer.expectedOutput1 = exO1
Once you have calculated the deltaError for every neuron in the last layer (output layer), you can move onto the next step.
Step 3: Calculate the delta-error for the hidden layer neurons
The hidden layers for this neural network, is any layer in the neural network, that is not the last layer. However, each layer should sit like ducks in a row. And we are now going to calculate the delta error for the second last layer in the neural network. This could in theory be the first layer in the network (if this network only had 2 layers).
HLN = Hidden Layer Neuron,
LLN = Last Layer Neuron,
aO=actualOUTPUT,
dE=deltaError
HLN.dE = (HLN.aO) x (1-HLN.aO) x (Sum of   [LLN.dE   x   LLN to HLN connection weight])
Keep moving back through the network layers until you reach the 1st layer (ie, you run out of layers).
Step 4: Update the weights of the connections and Bias of neuron.
a) Multiply the neuron's deltaError which was calculated in either step 2 or 3, by the learning rate (0.1), and by the connection's connEntry value.
b) Then add this calculated value (in Step (4a)) to the current weight of the connection.
neuron.connections[i].weight += (learningRate * neuron.connections[i].connEntry * neuron.deltaError);
The bias is like a connection with a constant connEntry of 1, therefore the calculation is
neuron.bias +=  (learningRate * 1 * neuron.deltaError);
Up Next: Neural Network (Part 6):
Back Propagation - a fully worked example.
To go back to the table of contents click here
Posted by ArduinoBasics at 8/12/2011 11:27:00 pm 6 comments
Labels: ArduinoBasics, Back propagation, best arduino blog, Learning, Neural Network, Neuron, Processing.org, Programming, project, tutorial

The Neural Network
Finally, we made it to the Neural Network class. This is the top level class that manages the communication between the layers. This class provides the necessary glue to hold all the layers together. It also controls the flow of information forwards and backwards from layer to layer. Lets have a look at a simple 2 layer neural network. 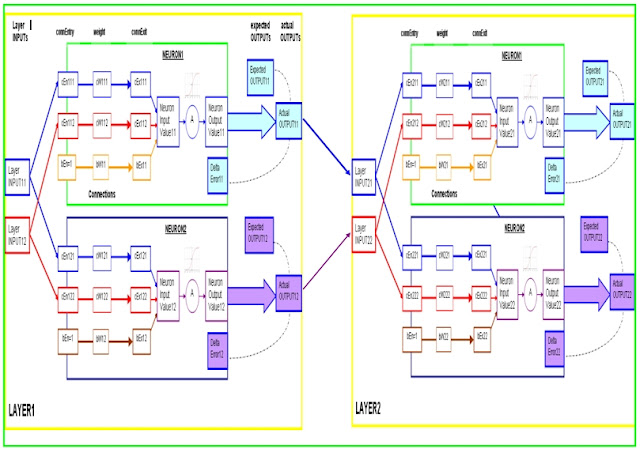 The above neural network starts with 2 inputs in Layer1 and finishes with 2 outputs in Layer 2.
This Neural Network structure is very modular in design. Layers can be added quite easily without affecting the functionality of the neural network code. The only layer that is treated a little bit differently from other layers in the neural network,  is the last layer.  However,  any/all preceding layers are treated exactly the same. And the differences in the last layer, only really come into effect in Neural Network training.
When building my network, I just need to make sure that the number of outputs (or neurons)  in the current layer match the number of connections in the next. If I wanted to create a neural network, that accepted 3 input signals from the outside world, to process them with 10 neurons, but only wanted to output one result... I could build the neural network in the following way.
addLayer(3,10)    : This first layer would have 3 layerINPUTs and 10 neurons
addLayer(10,1)    : This second (and last) layer would have 10 layerINPUTs and 1 neuron
The neural network class would manage these two layers, to ensure that information was passed from one to the other seemlessly. Here is the code for the Neural Network class that would make it possible:

The purpose of a layer is mainly to group and manage neurons that are functionally similar, and provide a means to effectively control the flow of information through the network (forwards and backwards). The forward pass is when you convert input values into output values, the backwards pass is only done during network training.
In my neural network, the Layer is an essential building block of the neural network. They can work individually or as a team. Let us just focus on one layer for now
This is what a layer with two neurons looks like in my neural network: 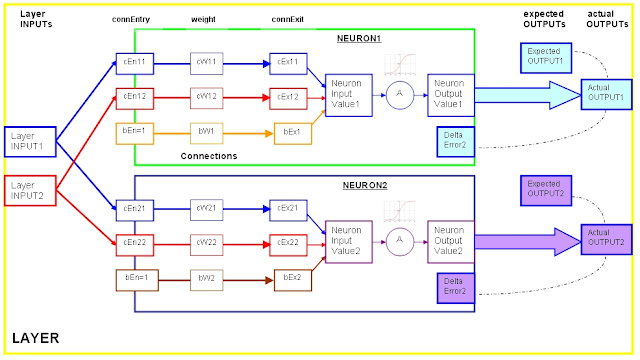 As you can see from the picture above, I tend to treat each neuron as an individual.
Both neurons have the same connEntry values (cEn11 = cEn21) and (cEn12 = cEn22), which stem from the layerINPUTs. Other than that, the rest is different.  Which means that Neuron1 could produce an output value close to 1, and at the same time Neuron2 could produce an output close to 0, even though they have the same connEntry values at the start.


The following section will describe how the layerINPUTs get converted to actualOUTPUTs.


Step2: Send each layerINPUT to the neuron's connection in the layer.
You will notice that every neuron in the same layer will have the same number of connections. This is because each neuron will connect only once to each of the layerINPUTs. The relationship between layerINPUTs and the connEntry values of a neuron are as follows.


Step3: Calculate the connExit values of each connection (including bias)


Step4: Calculate the NeuronInputValue for each neuron


Step5: Send the NeuronInputValues through an Activation function to produce a NeuronOutputValue


Please note that the NeuronInputValues for each neuron are different !

Here is the code for the Layer class: 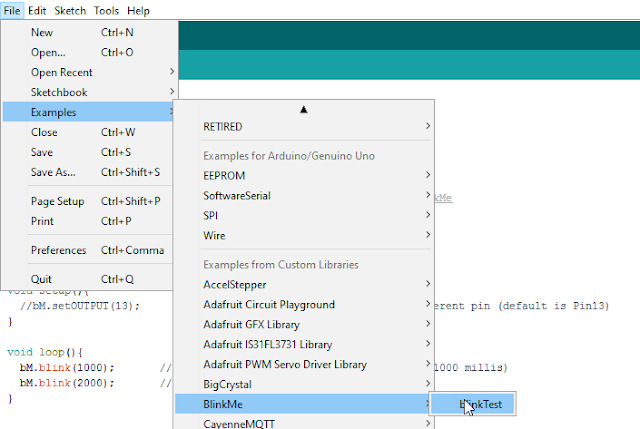